So here I am, living the life of a New Yorker. I love it, but let me tell you, I’m exhausted. My body hurts, my brain hurts. I had every intention to share another wonderful post with you all today, but to be honest, I’m just too tired. I’m writing this from a nail salon, when mid pedicure the woman offered me an extra 10 minutes of leg massaging. I’m not sure what it will cost, but realistically, I don’t care. She is working the pain out of my legs and intelligence out of my head so I will spare you my current thoughts.They’re mostly unintelligible anyways.

I will say however that I am loving the city, and in addition to other things I am taking full advantage of the food. I came across this Thought Catalog essay the other day and felt it was worth sharing. It is exactly how I have long felt about food, and definitely how I have felt through my efforts to stay gluten free lately. I hope you enjoy it, and I will post again soon with my own thoughts. After the polish dries. And maybe a nice long nap!

I Will Never Love Anyone The Way I Love Food

I’ve recently been on something of a diet (though I hesitate to even use that word, as it immediately conjures up images of all-juice regimens and laxative tea) and it’s just the worst thing ever. Even though I’m not really doing anything except eating a little less and moving around a little more, it’s still cutting out so many things I love so dearly. I mean, don’t get me wrong, it’s awesome to feel more energetic, fit into my clothes better, and feel prepared for summer, but I miss bad food so much. There are those that say, “Nothing tastes as good as skinny feels,” and to them I reply, “Clearly you have never had jalapeño poppers.”

The thing is, when you are limiting calories or cutting certain things out of your diet entirely, you start to realize how much of it you miss — how much it just enhances every day life. Watching a movie? Without some Sour Patch Kids or popcorn, it’s just staring at a screen with moving pictures on it. How am I supposed to feel like a Viking if I can’t saw into a bloody steak? Could you imagine blowing out a few candles on top of your birthday cement block? Of course not! It has to be made out of delicious, delicious cake — which society and Pinterest are now proving can be made into any shape the heart desires, as well as served on sticks like sugary corndogs. The possibilities food bring are just limitless, and there is truly a gastronomic delight for every occasion.

But I feel constantly in a battle with my undying love for food. I know a lot of the stuff I like is bad for me, and I know it is gluttonous to want to try all of my favorite candy bars deep-fried at least once in my lifetime, but I can’t help it. Food is more than just for eating, too, it’s also for looking at in my spare time. I love browsing food porn blogs, watching the Food Network, and even just reading cookbooks for pleasure. And I know there are many people who would say, “Come on, what a waste of time, it’s just nutrients you’re putting into your body to survive,” and they’re right, technically. It’s probably stupid to be so obsessed — especially when I’m not even what one would consider a “foodie.” Sure, I like all the bullsh-t combinations of jicama foam and artisan goat cheese on a reduction of blah blah blah, but I also will sit down in front of a bowl of Peanut Butter Captain Crunch and demolish that thing like I’m making way for a new apartment complex. I would eat Popeye’s spicy fried chicken until there were no chickens left in the country and I had to wait for new chickens to grow up. 5 Guys’ Burgers make me feel like I’m a child again, and anything is possible.

And obviously I know it’s something that needs to be done with moderation, and I get just as mad as anyone else when I see parents who constantly feed their already obese children junk food, taking away the one time in their lives where they’re ever going to want to run around all the time of their own volition. I know that food, especially the maybe-slightly-less-than-nutritious-food that I like so much, is a double-edged sword. But I would rather fall on that sword and be skewered like an overfull BLT than to give up the awesome stuff entirely. I know many people who consistently deny themselves the errant burger, or slice of pie, or scoop of ice cream. And yes, they are skinny and toned as hell. They look like they could be backup dancers in an infomercial for an exercise tape. But you know what? I see them listlessly poking away at their mixed green salad at every lunch, and they are sad. They are sad because there is a part of them that knows that bbq ribs taste like winning an Oscar, and they can’t be a part of it.

So I have decided that, while working out is always a good thing and I should do that as much as possible (within reason), there is only so much food that I am willing to give up. Sure, eating lots of fruits and veggies and drinking water is more than doable, and great for my body, but I am never going to find myself at a restaurant and pass over the potatoes au gratin to get a pile of spinach. Never. And if that means that I will perpetually be a little bigger than I would otherwise, or that I’ll never have that stupid little v-cut on my hips that is apparently a requirement to succeed in life, so be it. I don’t care, frankly, and as long as things are being done in moderation — life is too short to turn down the éclair. 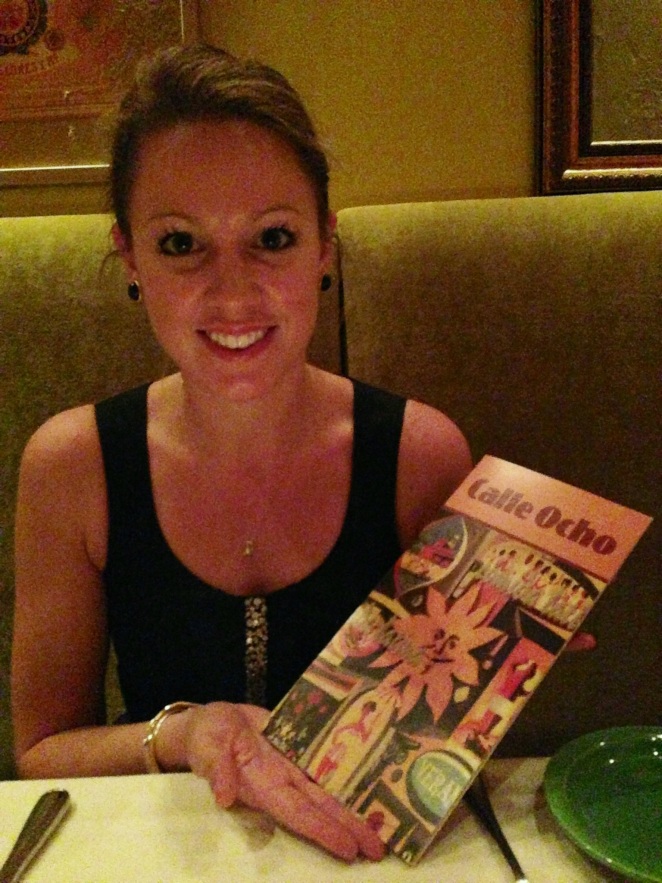 © [Kateri Allard] and [According to Kateri], [2012-2013]. Unauthorized use and/or duplication of this material without express and written permission from this blog’s author and/or owner is strictly prohibited. Excerpts and links may be used, provided that full and clear credit is given to [Kateri Allard] and [According to Kateri] with appropriate and specific direction to the original content